A testament to both Oxford High School’s commitment to their athletic programs and the hard work of their student-athletes, 15 Wildcats inked their National Letters of Intent at the Ian Smith Gymnasium on Feb. 7. The boys’ basketball program hosted the Davison Cardinals the same night, allowing the gym and its upper-level track to be […] 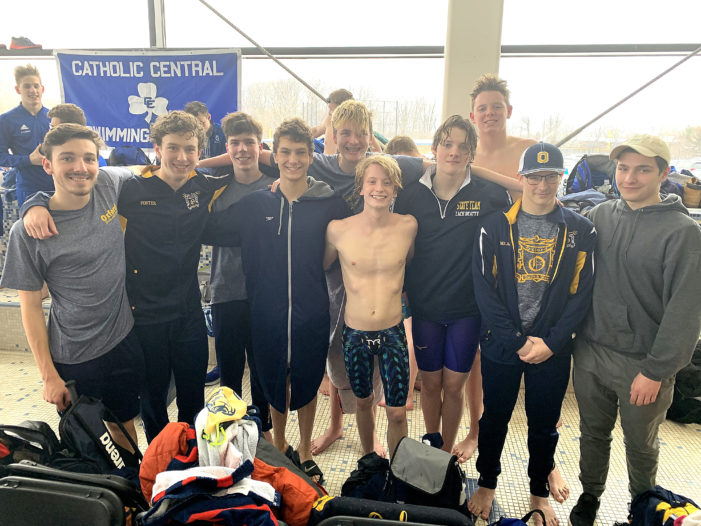 Held at Waterford Mott High School on Feb. 7-8, the Oxford Wildcats swim and dive program finished in 15th place among 25 competing schools in the Oakland County Championships. The Wildcats recorded 57 points, narrowly holding off the Berkley Bears and Detroit Country Day Yellow Jackets, who each posted 55 points. For the third […]

Icers starting to gain momentum as season winds down

Some teams alternate wins and losses consistently throughout the season. The Oxford-Avondale United hockey program is not one of those teams. OAU has shown a fondness of long streaks, both positive and negative. After dropping five consecutive contests from Jan. 9-25, head coach Derek Billis’ squad played their best hockey of the season and ripped […]

At a Valentine’s Day showdown, the Oxford Lady Wildcats returned home on Feb. 14 after a two-game road swing to battle Oakland Activities Association White foe Rochester Adams Highlanders. Featuring a seesaw opening 16 minutes, Rochester Adams pulled away late for a 53-45 victory. Slightly higher-scoring, but the game was very reminiscent of these two […]

Hoping to establish a season-long three-game win streak, the Oxford Wildcats basketball team traveled to the outskirts of Pontiac to battle the Notre Dame Preparatory Fighting Irish in a non-league game on Feb. 11. Holding their annual “Parents’ Night,” the Irish honored the mothers and fathers of each of their 13 student-athletes pregame. In a […]

Completing the season sweep of the three divisional meets, the Oxford Wildcats competitive cheer program captured their second straight Oakland Activities Association (OAA) White title on Feb. 8 at the Ian Smith Gymnasium. Each of the first two OAA White competitions on Jan. 16 and 30, respectively, made up 25 percent of the divisional standings. […]

Regardless of the outcome, the Oxford Wildcats boys’ basketball team keeps fans on the edge of their seats. Dating back to their first clash with the Southfield A&T Warriors on Jan. 14, six of Oxford’s nine games have been decided by nine points or less, including four by four points or fewer. Fortunately for head […]

A lawsuit against the state of Michigan, filed in Nov. 2019 by Southfield-based Beaumont Health, was dismissed in a Court of Claims on Jan. 14. According to Beaumont, the Michigan Department of Health and Human Services (MDHHS) initially expressed a need for a facility in northern Oakland County, citing a 117-bed shortage. However, MDHHS then […]

The boys varsity basketball team had a busy, three-game week. Two Wildcat losses book-ended a victory of cross-town rival Lake Orion. Game one was a back-and-forth, low-scoring affair on Jan. 28, the Lapeer Lightning prevailed victorious, 47-45. The loss dropped the Wildcats to 5-5 on the season, their second loss of the year by just […]

The Oxford boys’ swim and dive program hosted the Third Annual Wildcat Diving Invitational on Jan. 25. Featuring a total of 55 competitors, this was the largest turnout the event has received in its brief history. Of these 55 divers, 33 took part in the 11-dive event, while the remaining 22 participated in the six-dive […]