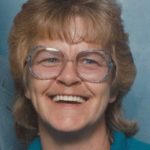 Bernice retired from Walmart in 2018 where she enjoyed working in the craft department. She formerly attended Highland Park Baptist Church.

Funeral services will be at 1 pm on Monday, January 27, 2020 at Stemm-Lawson-Peterson Funeral Home, 1531 Cobblestone Blvd, Elkhart where friends may visit with the family one hour before the services at the funeral home. Burial will follow at Carleton Cemetery, Elkhart. Online condolences may be made at the funeral home website.