By James Hanlon
Leader Staff Writer
“Attention all Oxford readers. Attention all Oxford readers. Be on the lookout for Bigfoot.”
The legendary Bigfoot is impossible to find. Maybe the seven-foot plywood cutout of the creature which went missing from an Oxford Township home will be easier to locate.
Last week, Meg Spencer of Ballantyne Rd. near Ray Rd. posted on social media that overnight July 6 or early in the morning July 7 Bigfoot was gone. The cutout appears to have been removed with a drill, which indicates it was a planned Sasquatch-napping.
Her husband and three young sons made the decoration as a fun, country-living family craft during the pandemic. “We’re all heartbroken someone would come on our property and steal it!” she said. “The neighbors would dress him up for holidays and he’s been a staple of our yard for a year.”
The beloved Sasquatch served as the neighborhood Facebook group’s cover photo, and no one complained of its presence in the past, so she doesn’t think it was a disgruntled neighbor.
“We’re off the beaten path, so it must be some kids.” She has driven slowly down nearby dirt roads, assuming they would pitch him in the ditch after taking some photos, because she can’t imagine what else they might do with it.
“No parents or adults have come forward that it showed up at their home so it’s just frustrating . . . can’t believe something so big went unnoticed without anyone seeing it in someone’s truck.” 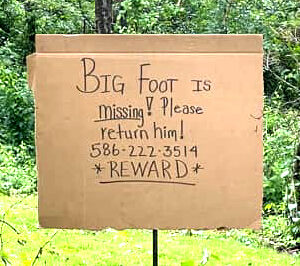 A missing notice was shared widely on local Facebook community groups, but nothing has turned up so far. The missing Sasquatch should not be confused with several other Bigfoot cutouts in yards around Oxford that were already there. So, the presence of other lookalikes might make the missing Bigfoot harder to spot.
The Spencers are offering a cash reward .