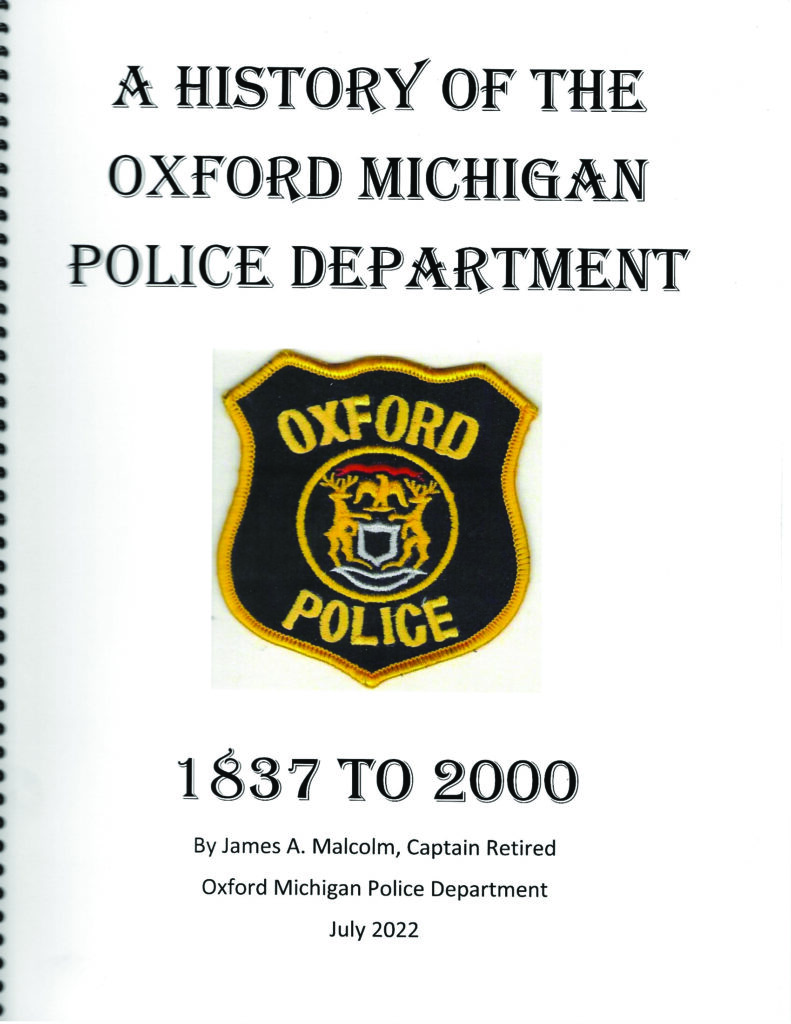 A History of The Oxford Michigan Police Department 1837-2000

By Don Rush
Oxford — Oxford has always held a special place in Jim Malcolm’s life. His grandparents had a farm in the township, and at one time owned the Oxford Tavern; his cousin was long-time Oxford historian Margaret Stoddard; Stub Robinson, another town historian gave Malcolm his first haircut; and for the better part of three decades Oxford was his source of employment as an officer of the Oxford Police Department.
He likes history. He loved the department and many of the men and women who served with him and now that he and his wife Pat have retired to the warm southern climbs of the American Southwest he decided to write a book, “A History of the Oxford Michigan Police Department 1837 to 200.”

“My cousin Margaret was my inspiration,” he said in a recent phone interview. “She had her first book published when she was in her 90s. Her stories of the early days of Oxford stirred my imagination. Oxford was a wild and woolly place back then!”
The 169 page book details law enforcement from the first Constables Adam Rossman and Horace Hovey (elected in 1837), Oxford Village Marshalls from the 1870s, night watch officers to the Oxford Police Department. He detailed police chiefs, officers, the department’s K-9 unit, giving recognition to part-time officers, dispatchers and even the bike officers.
The book has many photos of those who served the department, old newspaper clippings, color photographs of Oxford Police Badges and patches — locally as well as from other Oxford police departments from across the United States and from as far away as Oxford, England.
“I wanted to do something to remember all the men and woman who served Oxford and record the department’s history,” he said.
* * *
After graduating from high school in Pontiac Malcolm joined the United States Army. He was a tank commander in Germany. When he got back stateside, after the police academy he joined the Pontiac Police Department before hiring into Oxford in 1973.
While on the department he learned a lot of its history — like the story of Jay Gould, a night watchman who was killed in the line of duty in 1925.
“Back then the Purple Gang used to have cottages on Stony Lake. It was during prohibition and they used to bring in booze to town. He told them once to get out. The second time he told them, they killed him. They never found out who did it,” he said.

Gould was buried in Oxford Township Cemetery, but for years his grave was unmarked. In 2000, with the help of, among others, Maureen Helmuth and former Oxford Village attorney Bob Bunting, they were able to locate the grave and erect a proper monument. They were also able to get Gould’s name on the National Law Enforcement Officer’s Memorial in Washington, DC.
Malcolm, who no lives in Arizona with his wife Pat, spent over 26 years as an Oxford policeman, retiring in 2000. He was the acting police chief when the Oxford Township Police Department disbanned. After covering production costs, funds raised from the sale of book will be donated to the Northeast Historical Museum and various law enforcement charities. He plans to sell the book at the museum located at 1 N. Washington Street, the phone is 248-628-8413.

Former Oxford cop pens book on Department added by Don Rush on May 11, 2022
View all posts by Don Rush →