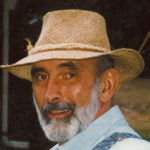 A Michigan resident his entire life, John enjoyed working on his farm, long walks with the dogs, challenging conversation, his community service and riding his motorcycle.

Active in the community, he helped start the North Oakland Transportation Authorty and served on its board, served as chairman of Addison Township Police and Fire Board for 20 years, served as an elected township trustee for 14 years, worked on the development of and was a park ranger for the Addison Township Watershed Preserve Park.

Services were held at Lynch & Sons Funeral Directors in Oxford on Oct. 12. It was officiated by Chaplain Dave Gerber.

Memorials in John’s memory may be made to the Wounded Warrior Project or Alzheimer’s Association.