Michael J “Turtle” Moran of Madison Heights passed away at his home on on Nov. 21, 2019, after an eight-year battle with cancer. He was 60-years-old.
Mr. Moran grew up in Leonard and attended Oxford schools. He roamed the trails and fields and sometimes the sidewalks on his pony named Dolly or on a series of motorbikes he owned. He earned the nickname Turtle in the first grade when he attempted to kiss the class’ pet turtle. The turtle bit him on the lip. 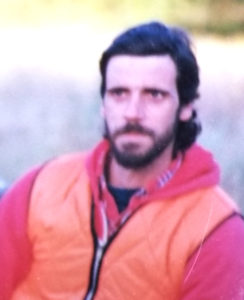 A lifelong outdoorsman, he enjoyed fishing, small game and deer hunting at his family cabin in Hersey, Mi. He never surrendered to cancer and believed in living to his last breath, even purchasing his 2019 deer hunting license before his passing.
He was a loving son, husband, father and grandfather.
He is survived by his wife, Donna, son Matthew, daughters Melissa Moran, Catherine (Mike) Sullivan, and Jessica Moran; grandchildren Seth and Elsie Moran, Brittany, Kaylee, Valentino and Edmund Martinez, Elaina and Abigal Sullivan.
He is also survived by his brother Tom (Kim) Ballard and his father John “Mike” Moran; maternal aunt, Betty Fultz, parternal aunt, Ellen DeLater, numerous cousins, friends and neighbors.
Special thanks to sons in law Jessie Broand and Mike Sullivan and brother in law Lee Dunn for their friendship and support in helping him check off items from his “bucket list.” Thanks also to former wife, friend and mother of Matt and Melissa, Denise (Ken) Salens for her willingness over the years to maintain the ties which make a family.
Mr. Moran was preceded in death by his mother.
Sleep tight boy.
A memorial service was Sunday, Nov. 24, at Lynch and Sons Funeral Home, Clawson, with the Rev. Father Don Demmer officiating.