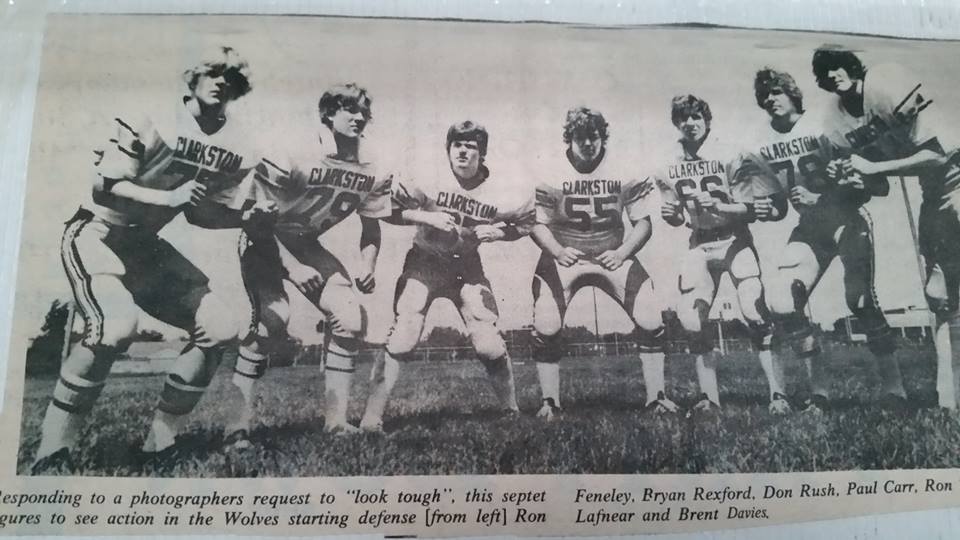 You know, like many a Michiganian I love this time of year. Drive up and down our local roads and you can see the leaves turning orange. You just know it’s gonna’ be beautiful soon. And, while I love this upcoming season, I also kinda’ hate it. It’s the time our Detroit Lions get to find new ways not to win.
I am not even gonna’ go into last Sunday’s meltdown in Arizona. Up 16 points with like 5 minutes to go. End up with a tie. Nice.
The only redeeming pigskin competition of note (for me, and it’s my column, so it is ALWAYS about me) is high school football. I love reading about all our local teams. From the Martians to the Dragons, Wildcats to the Wolves and even the ever-lovin’ Blackhawks, I enjoy what the athletes bring to the field.

I majored in wood shop, talking and making jokes during my high school years (maybe that’s why I never had a date), I also managed to play football for the Clarkston Wolves. I had a great career, full of glory and pain, pain and glory. And, why not? Was I not part of the offensive line? Did I don the pads and helmet and line up next to the center and play guard?
In two years of varsity play, I think I touched the ball a negative two times. I did trip up our running back Mark Hughes once for a loss of yardage. The fact he was on our team, is something I try not to bring up when talking about the glory years with my sons, lest they learn of my slow-of-footness.
For some reasons when sons Shamus or Sean ask me about my high school gridiron prowess, I neglect to mention my greatest contribution to the team was mastering how to communicate (and be understood) without removing my mouthpiece. I also forget to disclose my crowning achievement, the pinnacle of my high school football career was being nicked named “Astro.”
So much did I talk with my mouthpiece in; so much did I sound like a cartoon dog; so much was that name used, I doubt they know — to this very day — my real name is Don Rush.
Looking back, I was a good drooling mascot type of player, and as everybody knows, every football team needs somebody who is good at screaming loudly, drooling and letting saliva run down the sides of his mouth. It scares the other team. (To our young readers: Astro was a dog on the cartoon show, The Jetsons. Astro is the predecessor to Scooby Doo in the talking-with-marbles-in-mouth cartoon dog. Some would say Astro is a poor man’s Sc

ooby Doo. I disagree, but that’s a column for another day.)

Post season, there’s always an awards ceremony. Prior to the ceremony the coaching staff assesses all players in order to dole out awards for things like, Most Improved Player, Most Valuable Player, Defensive Player of The Year and the like. When I played, apparently our coaching staff of Walt Wyniemko, Kurt Richardson, Dave Martin, DJ Marsh, DJ Campe and my very own teammates thought so highly of me they bought and awarded me a blue hat with my new name blazoned across in big maize letters: A-S-T-R-O.
Yup, I got the Astro Award. While everybody else got golden-colored trophies, I got a nylon baseball cap.

Yeah, I was soooooo good in football that I received a letter from the head coach of Dartmouth College inviting me to try out for their team. (Yeah, I know it’s an Ivy League team, so it’s almost football.) Somewhere in the letter the coach said they didn’t give out scholarships. Well, I didn’t need to waste any more of my time, or my parents. I threw the letter away. I knew my folks couldn’t afford to send me to college and if Dartmouth wasn’t gonna’ throw anything into the kitty, there was no need to dream, and I figured that was the end of my gridiron story.

As fate would have it, I received an academic scholarship to Central Michigan University. During my senior year I was in the library with co-ed student Dina K. Hinkley. I think she was studying and I was reading a magazine or newspaper or something and that’s when I read Dartmouth didn’t give out scholarships . . . instead they found “sponsors” for players.
Dangblabit, I could been a Dartmouth Drooler!

My “crowning” gridiron accomplishment added by Don Rush on September 11, 2019
View all posts by Don Rush →