By James Hanlon
Leader Staff Writer
The usual Memorial Day observances returned to Oxford this year, with a ceremony in downtown’s Centennial Park Monday morning, followed by a parade down M-24 and Burdick St. to Ridgelawn Memorial Cemetery for a 21-gun salute. 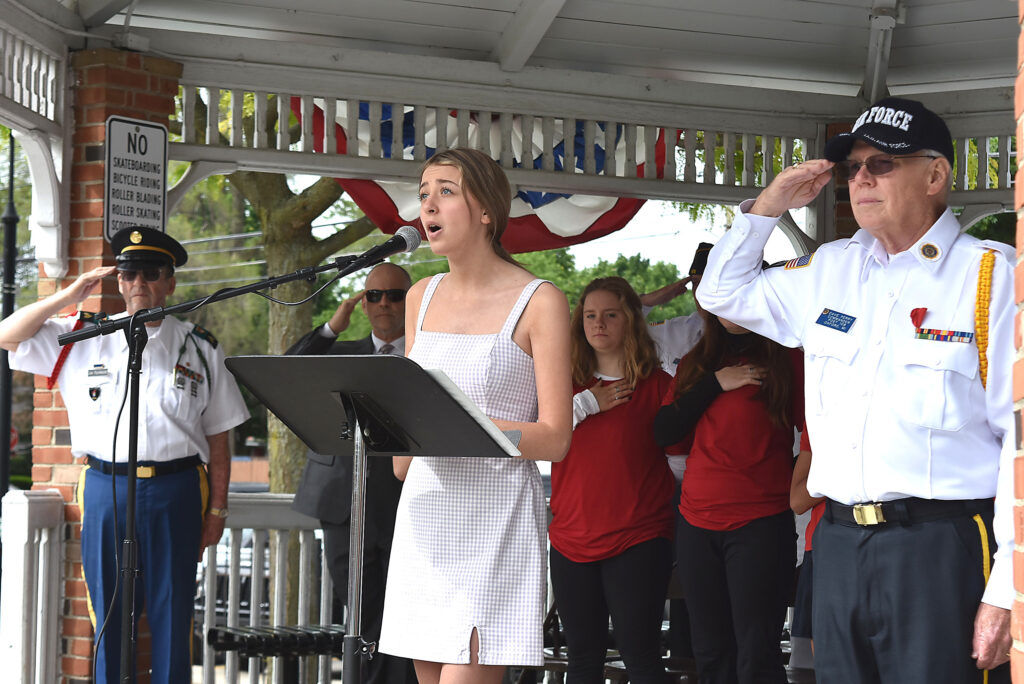 The high school band was not able to perform this year due to ongoing coronavirus restrictions, but a 2021 graduate, Kate Dietiker, proudly sang the national anthem.
“The veterans of Post 108 sorely missed having this ceremony last year,” said American Legion Post 108 Commander Dave Perry, “but rest assured, we never stopped honoring and remembering our fallen and missing veterans.”
Jim Parkhurst, a former Post 108 commander and a U.S. Army veteran who served in the Korean combat zone during the Vietnam War, explained the meaning of Memorial Day in his keynote speech. “We honor our veterans and remember the sacrifices that our veterans have made since their country was founded,” he said.
Today, U.S. troops are still in Afghanistan and other parts of the world, where “they perish daily and that is why we say the price of freedom is not free. The POWs and MIAs know the price of freedom. President Ronald Reagan said, ‘if you say there are no heroes, you just don’t know where to look.’”
Parkhurst asked those in attendance to think of all the national, state and local cemeteries around the world. “Now our doctors, nurses and emergency responders fight a new enemy called COVID-19. They’re on the front line at every hospital every day, every hour.”
He reminded folks to “take a moment to give thanks, pray for those still serving and bring our POWs and MIAs back home.”
Commander Perry said he is not an authority on what people should think of veterans. “What I can tell you with absolute certainty is that veterans do not believe they are heroes. The true heroes of our nation, the heroes of all veterans, are the military personnel who gave their lives in the defense of our country to establish and preserve our freedoms. That’s why we’re here today, to honor those who made the ultimate sacrifice,” he said.
Besides family and close friends of those fallen heroes, most cannot truly understand their sorrow unless they have experienced it, but “we can always offer our support,” Perry suggested. “We can place flags and wreaths at the graves of the fallen, we can wear the red poppy to honor their courage, we can donate to charities that provide for their families, and we can look at surviving veterans and say ‘thank you for your service.’
“Let us honor the memory of those heroes no longer with us, and strive each and every day to live up to the example set by such selfless patriots.”