This came one week after protesters demonstrated along N. Oxford Rd. in front of the football field. That protest, organized by Pastor Tom Donnelly of Firmly Rooted Ministries, had been officially cancelled, when Donnelly learned Oxford Township intended to bill Firmly Rooted for additional police presence.

The cancellation likely dampened its turnout. Friday’s march had about three times as many people.

Demonstrators gathered at the Scripter Park baseball fields at 11a.m. The crowd was bolder this time, shouting chants like “Black lives matter” or “no justice, no peace” and “hands up, don’t shoot.”

The marchers kept to the sidewalks, which were very crowded. Oxford Police Chief Mike Solwold walked along with them, and directed traffic as the procession crossed intersections. The march ended at Centennial Park where local activists spoke from the gazebo.

The event was organized by Andrew “A.J.” Jones, a Black Oxford native who now attends Wayne State University. Although protests in the big cities are getting most of the attention, he says “Communities like Oxford that are predominately white are where the movement needs to happen the most, because the majority of America is here.”

Jones decided to organize the event when he heard about the difficulties the first protest had. “The Township of Oxford made it hard for Tom Donnelly to have a protest. I just felt that that was wrong.” 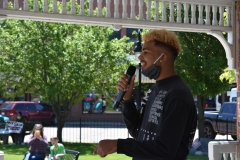 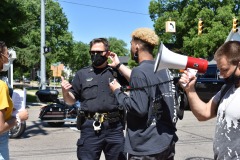 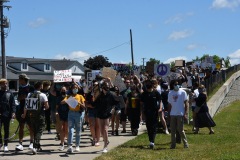 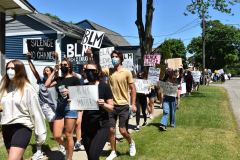 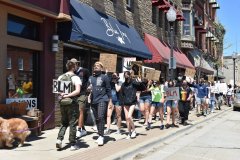 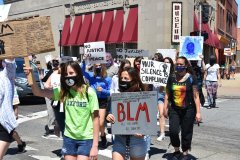 To avoid trouble with the Township, Jones organized the march through Oxford Village instead. He reached out to Chief Solwold, and the two had a long conversation about racial injustice issues and the recent killing of George Floyd. “That was an amazing moment,” Jones said, “between me as a Black young man and a white police chief, just to kind of agree on everything. That support was what made me really feel comfortable doing this.”

Solwold appreciated that Jones had the courtesy to contact him with his plan and the route he wanted to take. “I knew it would be fine as long as I walk with them and show them that we’re listening,” Solwold said. “That’s the important thing. We all have a lesson to learn.”
Solwold said he canceled plans to go out of town so he could be sure to walk with the protesters. “You got to be willing to stand in the middle and listen to both sides, otherwise you really shouldn’t be doing this job.”

The job of the police is “to communicate and deescalate,” Solwold continued. The department will have classes on de-escalation, “just as a reminder.”

He agrees that what happened to George Floyd was an injustice. “We have to make sure that kind of thing doesn’t happen again. We are not judge and jury out on the street. We have to take a situation under control, and the person will have their day in court.”

In Centennial Park, Jones told the crowd about an incident that happened to him two years ago “not even three cities over” when he was pulled over by a police officer and he started having a panic attack. “The way I was raised, when you see a police officer get out of his car, it might be the last time you see anything,” he said. The officer handed him a ticket and said, “You see what happens when you just comply? I don’t understand why it’s so hard for you people.”

Greg Myers, a Black Oxford resident and father who attended the last protest, showed the crowd his blue and gold Oxford baseball cap.
“Every time I go out for a walk,” Myers said, “I make certain I have this hat on, because I don’t want anybody to think I don’t belong here. Because if I walk out like this,” Myers took the hat off, “people may look at me strange.”

Pastor Donnelly preached about peace and justice, and how to have effective dialogue. He then offered a prayer for “a transformation of hearts.”

Jones led a moment of silence for all those who have lost their lives through police brutality. Everyone present raised their hands in the air for a full minute. The crowd peacefully dispersed from the park at about 1 p.m.

Afterward, some regathered for an informal rally at 1 S. Glaspie St. on the corner of Glaspie and Burdick St. The rally was organized by Be the Change Oxford, a local activist group.