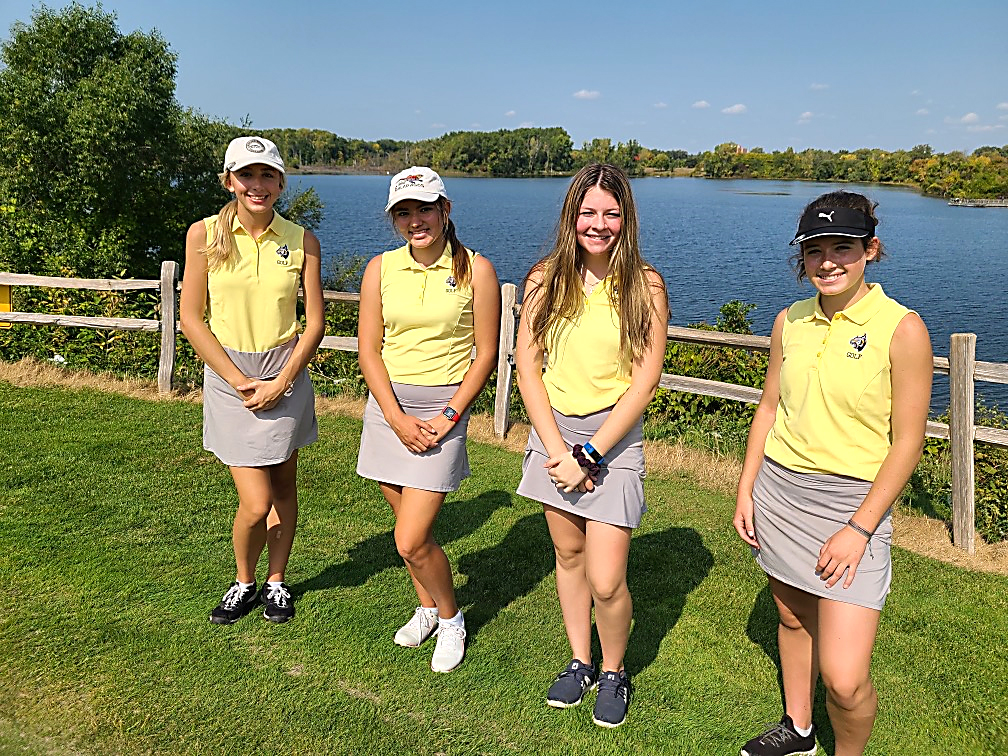 By Teddy Rydquist
Leader Staff Writer
Featuring an exciting foursome of freshmen, Keira Billis, Ellie Gieselman, Gabby Wait, and Lexie Yankee, plus a trio of senior leaders, Kate Dietiker, Janelle Grech, and Eryn Petriko, Oxford girls’ golf head coach Gretchen Gabler was optimistic about her team’s prospects entering the 2020 season.
On Tuesday, Sept. 22, battling the Birmingham Groves Falcons in an Oakland Activities Association (OAA) White Division match at Lincoln Hills Golf Course, Gabler’s Wildcats broke a program record that had stood for a decade.
Defeating the Falcons by 17 strokes, 176-193, Oxford bested the nine-hole school record of 183 by seven strokes, which was set in 2010. Grech, one of the team’s co-captains, led the way with a 41, followed closely by Billis’ 42. Dietiker carded a 46 and Petriko, the other co-captain, registered a 47 to round out the scoring.
Competing in the second OAA White Meet of the season at The Links at Crystal Lake two days later, the Wildcats again etched their names in the record book, this time establishing an 18-hole record. Finishing in third-place out of the six White Division schools, Oxford totaled a 345, eclipsing the previous record, 346, which was also set by the 2010 squad, by a single stroke.
Once again, Grech was the team’s top individual, posting an 80, with Billis and Petriko each tallying an 87. Gieselman completed the scoring with a 91.
The Wildcats’ 345 was tied with the Clarkston Wolves for second-place, but the tiebreaker, the score of the team’s fifth golfer, gave the edge to the Wolves. Athens won the meet with a 325.
Fresh off these fantastic performances, Oxford kicked off four-straight days of matches starting Sept. 28 by hosting the Avondale Yellow Jackets at Metamora Golf & Country Club. The girls also faced off with the Stoney Creek Cougars in a home match the next day and will hit the road to clash with the Flint Metro League’s (FML) Brandon Blackhawks today (Sept. 30) at Goodrich Country Club at 3 p.m. On Thursday the Wildcats will return home to compete against Troy Athens at 3:15 p.m.