By Dean Vaglia
Leader Staff Writer
STEM (science, technology, engineering and math) education can lead to important and high paying jobs, but it is hard to get kids engaged with the exciting possibility of doing math for a living.
Enter the STEMi Mobile Innovation Station.
The Oakland Schools STEMi is a 1,000 foot wide trailer filled with hands-on stations and technology to connect students with the various applications of STEM education. Two weeks ago the STEMi stopped at Oxford Middle School to work with Oxford Community Schools students.
“What we’re focusing on here is really getting students to understand what they like and what they are good at in preparation for career readiness,” Phil Kimmel, an Oakland Schools STEM Consultant, said. “If we get students thinking about what they might be interested in doing, then we can find out why they are interested in that … Not just saying ‘We really want you to focus on being an engineer or a doctor’ or whatever it is within a STEM related field, it’s figuring out what you liked about those STEM related processes.”
The STEMi is broken up into four stations. Going clockwise from the entrance at the back of the trailer, the first station to the left has several Microsoft HoloLens virtual reality sets running various simulators. On Monday, Sept. 27, students could simulate operating an excavator.
“They get to basically immerse themselves in an augmented-reality world,” Kimmel said.
The next station is a figure-eight track with model-sized autonomous vehicles and a traffic light.
“The students get to interact with these four vehicles and really understand how the vehicles are smart [and] also the infrastructure and the world around those vehicles are also smart,” Kimmel said. “These vehicles get to talk with the traffic lights, they get to talk with each other and really focus in on how they can interact in that world.”
Following that students can interact with a 3D environment using the zSpace system.
“zSpace is a 3D interactive world,” Kimmel said. “[Students] get to move things around and work within that three dimensional space understanding that they can move, twist, enlarge, push things in and out. So getting them to understand how to design in that space.”
The last station sees students working with robotic arms.
“[The station is] really focusing on how we as humans interact and collaborate in a robotic space or in a robotic environment,” Kimmel said. “The students actually participate in a challenge where they pick up an item, put it into another item and try to balance those onto each one of three pedestals.”
The STEMi is on a tour of all 28 Oakland County school districts.
“The biggest thing we want students to be able to take away from this is a connection to something they like doing, a connection to something that they’re good at doing and a connection to something that they can be successful in financially and make money doing,” Lauren Marchelletta, an Oakland Schools STEM Consultant, said. “If they come off of here and determine that they really like doing construction or that they really like the way that a collaborative robot works, then we’ve done our job and identified something that they can strive for in the future.”
The STEMi was funded by grants from The Zakoff Family Legacy Fund, The Bosch Community Fund, Community Telecommunications Network and Dell. 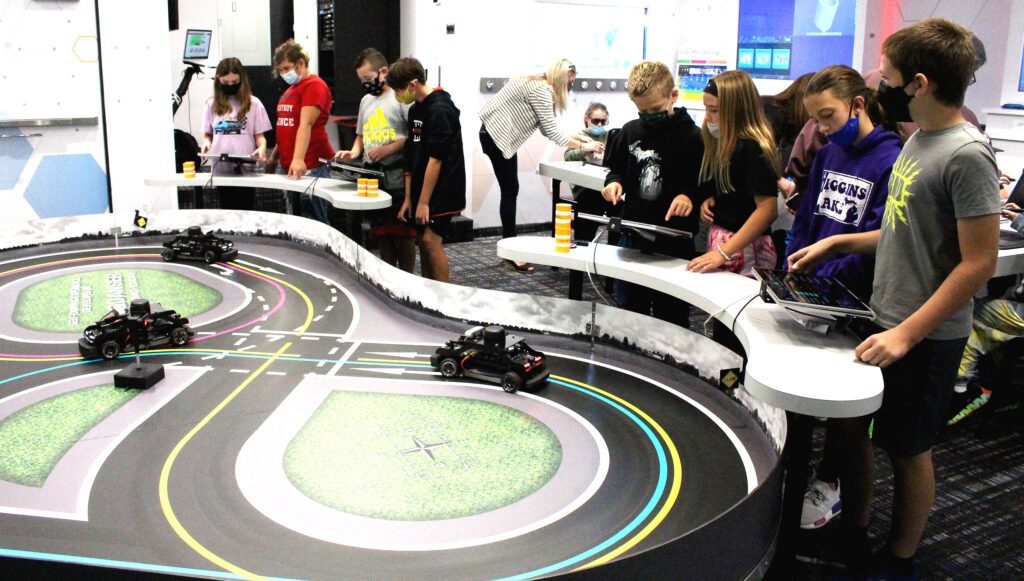