100 gather for vigil and peaceful protest 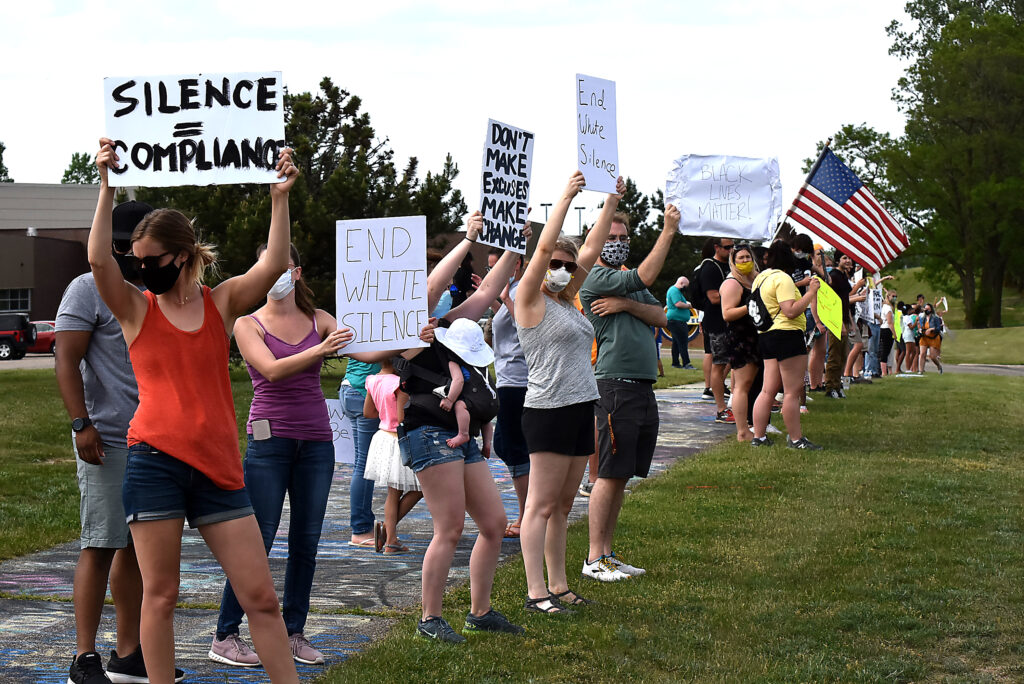 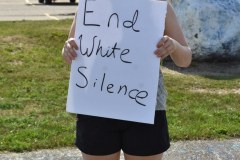 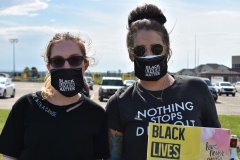 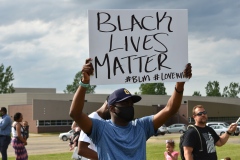 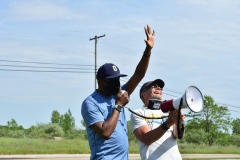 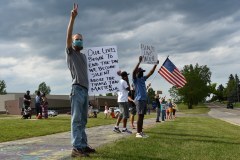 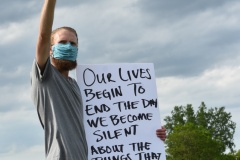 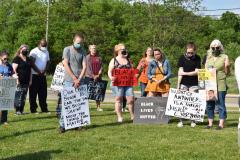 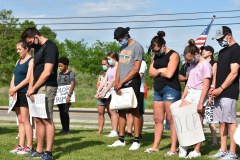 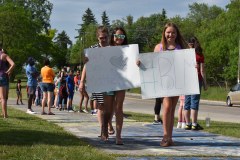 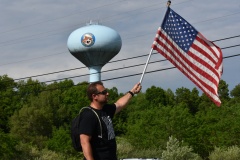 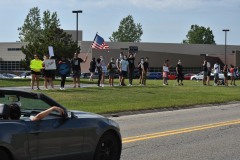 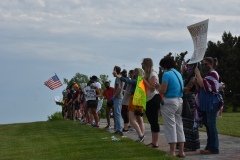 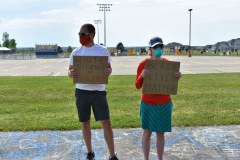 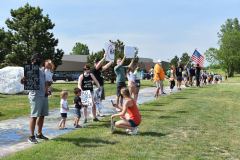 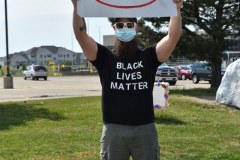 By James Hanlon
Leader Staff Writer
Rush hour motorists driving along the M-24 detour on N. Oxford Rd. witnessed a line of protesters Friday, along the sidewalk in front of the high school football field parking lot.
The demonstrators joined similar protests in hundreds of cities and towns across the country in recent weeks, protesting racial injustice and police brutality after a video of a Minneapolis police officer killing an unarmed black man named George Floyd went viral.
Despite being officially cancelled by the organizer, altogether about 100 protesters showed up, with some coming and going between 4 and 6 p.m.
Although the slogan was frequently used, the protest was not formally associated with the activist organization Black Lives Matter.
The event, a “prayer vigil and peaceful protest for George Floyd/against racial injustice,” had been planned by Firmly Rooted Ministries Pastor Tom Donnelly. He had first planned the event for outside the Legacy Center at 925 N Lapeer Rd. (where the Firmly Rooted congregation now meets) Wednesday, June 3.
According to Donnelly, the owner of the Legacy Center had “external pressure” to cancel. Donnelly, who is also the Oxford School Board President, then rescheduled the event to its new location for Friday, June 3, with the approval of Superintendent Tim Throne.
Hours before it was supposed to start, Donnelly cancelled the event again in an announcement on the Firmly Rooted Facebook page.
Donnelly had learned that Oxford Township intended to bill Firmly Rooted or the school district for overtime required by the Sheriff’s Department.
“At that point I had to stop,” Donnelly explained. “I could not put my church in that position.”
Some commented that they were still going anyway. Donnelly went as a private citizen exercising his First Amendment rights.
The protest was well-received among passing motorists, with many – especially big rigs – honking, slowing down or giving thumbs-up.
Besides the honking, the protest was quiet and peaceful. Donnelly brought a megaphone, but only used it to address the protesters before and after.
“If you came here agitated because this thing was cancelled, look around,” Donnelly gestured at the crowd before the protest started, “and don’t be agitated anymore. Let it go.”
There was praying, but there was no shouting, no chanting, no cursing. Nor was there looting, arson, property damage or even litter. Donnelly picked up trash afterward, leaving the area cleaner than he found it.
When he had to reschedule, Donnelly intentionally planned for an area that was both public and visible, but far away from any stores or businesses in case things got out of hand.
There was no police presence. No one from the sheriff’s office drove by to check it out.
“I would like us to respect the law,” Donnelly requested of the protesters, “which means we’re six feet apart from each other. . . I don’t want anybody saying, ‘you radicals did this or that or the other.’ We’re going to give those people in our community who are fearing no reason to fear.”
Donnelly introduced Greg Myers, a black man who lives in Oxford and knows Donnelly through his role on the school board.
“You all just don’t know how much this means to me, to my family, for you all to come out here,” said Myers, who came with his wife and five kids. “I just feel that this showing is more important to me than any showing, any protest that’s happened all over this country and all over this world because it’s happening right where I live.”
Pastor Matt Schuler of Holy Cross Oxford Lutheran Church offered an invocation.
“Heavenly Father,” he prayed, “this day we acknowledge the life of our brother in Christ and our brother in humanity, George Floyd, who is the most recent in a long line of deaths and injustice. . . In justice, Able’s blood cried out to God from the ground, so also George’s blood cries out to you. May we white people be slow to speak and quick to listen to our black brothers and sisters. May we distinguish those who cry out for justice and peace and those who are only seeking to destroy.”

Protester Voices
Caden St. John, who is going into eleventh grade, held a sign that said, “Black lives have always & always will matter!”
He said, “I just want to support this movement and Black Lives Matter. The injustice in the police force overall is unreasonable and I want to do my part in protesting it.”
Steve, a resident of Leonard who preferred not to share his last name, proudly waved an American flag.
“I’m protesting against racism, protesting against violence of any kind,” he said. “The looters and all the violence and vandalism – destruction is wrong. But everyone should also be treated equally. I don’t know if that cop leaning on that guy’s neck was racist or not, but that shouldn’t happen to anybody ever, period.”
Samantha Adams came with her six-year-old daughter, Jasmyne, who held a sign she made herself that said “I matter!”
“I think it’s really good to stand up for the ones that you love,” Jasmyne said, “And, it’s been kind of hard for me at times.”
She is half-black, Samantha said. “We’re here so she understands it is okay to be herself. She is a special human being and she matters, just like every other person, she matters.”
Samantha grew up in Detroit, but moved to Oxford her sophomore year in high school. The transition from a diverse area to a majority-white town was difficult. “I was told, I was forewarned I would have a hard time here. And I saw hard times but there were also people who loved on me.”
Most protesters were from Oxford or the surrounding area. Every outside protester this reporter spoke with had some connection to Oxford, having grown up here or having family or friends here.
Mike Stump, an Oxford High School graduate who now lives in Clarkston, drove to the protest because he knows Donnelly and a lot of people in the community.
“Just trying to support the Black Lives Matter movement and peace and unity for the community,” he said. “Just trying to get everybody together, stop the hate.”
Michael Myers, a relative of Greg Myers, lives in Pontiac. “I’m here for the cause. For black, white, brown, pink, blue, for whatever,” he said.
After protesting in Detroit and Pontiac, Myers said Oxford’s protest was totally different. “This is a peaceful protest, this is what it’s about.”
Amy McCartney of Rochester Hills, held a sign that said “Neutral is not an option.” She came to support her friends, the Myers family.
“I really think I’ve been neutral for a long time,” she said. “I don’t think I took the time to understand (or) to listen. I think watching George Floyd die changed everything. I don’t think seeing that and then not doing something, to me, is the same as being on the wrong side of this.”
A few folks said they came specifically because it was cancelled.
“In my own town, there are people in leadership that are trying to shut down people peacefully saying they care about other people. And that’s just wrong,” Benjamin Donnelly said.
“They told us not to come here today, so we’re here,” Eva Yagley said.
Many were not part of the Firmly Rooted congregation. Other community faith leaders attended, including Pastor Jesse Holt of Lake Point Community Church and Pastor Jennifer Jue of Oxford United Methodist Church.
There were also teachers from the high school.
“It’s our last day of school and we just walked out and joined,” said Leslie Okasinski, an eleventh grade language arts teacher.
“I have some students who are black and I want them to know that I stand for justice for them and that their lives matter no less than mine or anyone else’s. That’s why I’m out here,” she said.
Oxford Village Councilwoman Allison Kemp held a sign that said, “End White Silence.”
“I wanted to show my support for the cause and show that allies matter,” Kemp said. “I’m proud to see so many people show up to support a peaceful protest. I’m glad to see so many passionate people in our community.”
Oxford Village President Joe Frost brought a “Love Oxford” yard sign.
“I’m a firm believer in the First Amendment,” Frost said. “People have a right to protest. People have a right to due process in this country. And what we’re seeing in the last few weeks is due process breaking down, that police officers across our country have become judge, jury and executioner. I support our police department, I support sound practices and I support due process. Mr. Floyd and others in our nation’s history have not received that due process.”

Decision to Cancel
Pastor Donnelly was upset that the Township did not contact him directly. He had to reach out to them to find out what was going on. This didn’t leave him much time to make a decision.
“I don’t know what they were going to do, send me a bill afterwards and not even let me know it was coming?”
Wanting to “do it the right way” from the beginning, Donnelly had been in contact with the Sheriff’s Office, which he says was “supportive the whole way, without a doubt.”
He talked with them eight or nine times in four or five days. “So, this is not something that we were going into blindly or irresponsibly.”
The Sheriff’s Office never mentioned a bill, he says.
He assumed it was “a civic thing” paid for by the Township. “I don’t know what other towns are doing, but I can’t believe they’re charging somebody to pay for the overtime.” Donnelly referred to nearby towns that have also been having protests, such as Lake Orion and Rochester.
“There is something wrong with our leadership when a pastor who is trying to do something right gets manipulated and shut down.”