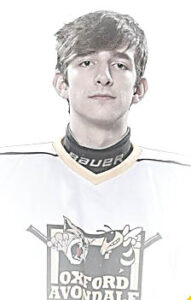 Brett Dinges: Brett is in his third year as a goaltender for the Oxford Avondale United Varsity Hockey team.Through hard work and perseverance, Brett worked his way up from third string to starting goaltender throughout his time with the team. This season he has turned in a record of 10-2 with a goals against average at 3.00 and a save percentage of 89%. Brett recorded a shutout in the most important game of the year against Troy United which clinched the OAA White Division Title. This is only the second time an Oxford hockey team has won their League title. Brett plans on attending Oakland Community College in the fall.

Jake Billis: Jake has been on the Oxford Avondale United Varsity Hockey team for all four years of High School. Jake led the team in points his sophomore year and was selected as captain for his Junior and Senior season. Unfortunately, he suffered a torn shoulder labrum that required surgery that cut his Junior season short. With a lot of hard work, he rebounded nicely to have a successful senior season. Jake finished third in scoring with 25 points (9 goals, 16 assists) in 13 games and 2nd in power play goals with 4. 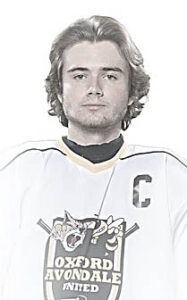 Jake has been an OAA scholar athlete every semester of high school with a cumulative GPA of 3.96. He plans on attending Michigan State University in the fall to study business. Good luck Jake and thanks for everything you did for OAU.