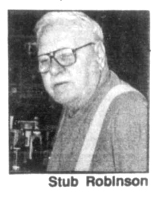 Mystery house went through ice While looking up items to fill our Peeking In The Past feature (see Page 7), we ran across this article from the Aug. 13, 1970 Oxford Leader. It’s a little local history we think you might enjoy. — DPR Aug., 1970 — A few weeks ago, an old straight-back chair […]

10 years ago July 14, 2010 A visible and wet reminder that the aging Addison Township Hall needs to be either repaired or torn down and replaced came cascading into the supervisor’s office and the Oakland County Sherif’s substation July 8. “The whole building is falling apart,” said township Supervisor Bruce Pearson. * * * […]

Peeking in The Past

10 Years Ago June 23, 2010 Even though it turned out to be a fake, officials took numerous precautions last week after a bomb threat was found at Oxford High School. The written threat was “considered to be low level,” according to information provided by Principal Mike Schweig. The message indicated the school would be […]

10 Years Ago June 16, 2010 Due to the significant drop in taxable values, the township cannot afford to maintain its current staffing levels at the substation over the next few years without completely exhausting its $1.292 million police fund balance and ending up with a deficit. * * * Before an arena packed with […]

From left, the Guys with Glasses team members Aidan Hepler, Kyle Crockett, Ryan Kisser, Tyler Crockett, and Brendan Collica hold the trophy they won in the Battle of the Books between Bailey Lake and Clarkston elementary schools. Each school had its own battle, and then the winners battled each other on April 2. The two […]

Independence Township approved a bid from Zambelli Fireworks of Pennsylvania for $12,000 in fireworks for the July 4 celebration. A rain date for the show is July 5. In a letter to the township, Zambelli said the company hosts many events from the Times Square New Years Eve Celebration in New York, Kentucky Derby and […]

A Look Back From The CNews archives

15 years ago – 1999 ‘City stop sign will stay put? A dozen residents living on Miller and Glenburnie Streets told the Clarkston Police Chief to STOP – as in stop the request to have the stop signs removed from the intersection. They got their wish when the city council decided to keep the two […]

Lakeville staff gets its just desserts

Whipped cream, chocolate sauce, colorful sprinkles, maraschino cherries . . . All of these yummy items are commonly used as toppings for ice cream sundaes. But at Lakeville Elementary School on Friday, they became toppings for Principal Kristy Gibson-Marshall and Physical Education Teacher Brian Luba. As a reward for collecting $7,862 during the annual Jump […]

A call to share in traffic solution Dear Editor, I agree with the people who are opposed to putting a ramp onto I-75 SB at Clintonville Road. However, if they lived in the area of Sashabaw and Waldon they would have a different opinion. We have all the congestion now that IRACE say they are […]