From Oxford to the big screen

Premiering at Emagine Novi on Nov. 17, the Detroit-based crime thriller ‘Devil’s Night: Dawn of Nain Rouge’ is now in its full theatrical release.

According to movie promotions, the flick is “unlike anything to come before it.” Devil’s Night features a military veteran returning home to a career in law enforcement and is assigned to a supernatural case. The main character, Billie, is played by Oxford resident Jesi Jensen.

A budding star on the Detroit acting scene, Jensen has a unique background which gave her the ability to relate to her role on a personal level. Prior to moving to Oakland County in 2016, she grew up in Virginia and served in the National Guard for four years.

“I never thought about acting until I joined the Army,” Jensen said of her path to where she is today. “I started working out, doing all these things to get in better shape and I joined the military. While I was there a photographer asked if he could take some pictures of me. They liked my look, so I started modeling.

“A writer/director found me on a modeling website and asked me to audition for a role. Ever since then I’ve been acting. Stopped modeling — I love acting so much, it’s what drives me really.”

In addition to Jensen, the film contains a few other local ties. Several scenes were filmed in downtown Lake Orion and, as she points out, residents of the area helped play a role in the success of the project.

“A lot of our filming took place in Detroit and Lake Orion. Downtown Lake Orion is such a picture perfect little area.

“It was so much fun filming out here, having all these people be so supportive. We had a lot of events where we needed people to be in the background and without any of those Lake Orion residents, we wouldn’t have the touch of reality in the film.” 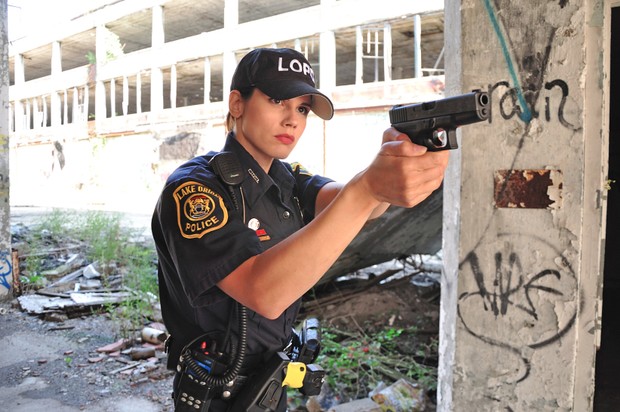 Providing their facilities, resources and expertise, the Lake Orion Police Department was instrumental in the filming process.

“I absolutely adore him,” she said of Narsh.

“He’s one of the big reasons I moved up to Oxford, he was always telling me, ‘Your life is like a vacation up here.’ He was right, I love the people here, everyone is so open, so kind, just happy. I wanted to bring my kids up in an area like this.”

A mother of two, Jensen has a 13-year-old daughter and a nine-year-old son. The Police Chief in Lake Orion since 2000, Narsh will be transitioning to the Holly Police Department beginning on Dec. 9.

The project was produced by Kyyba Films, a Michigan-based company founded in 2017 by Tel K. Ganesan and G.B. Thimotheose.

“This whole film would not have happened without Kyyba Films,” Jensen said. “G.B. and Tel are amazing. Everything that happened in this film was because of them and Sam bringing everyone together.”

The Sam she is referring to is director Sam Logan Khaleghi of West Bloomfield – another tie to the state of Michigan. Despite not having worked with him before this project, Jensen said the pair were able to hit the ground running.

“Sam was able to create relationships that wouldn’t have otherwise existed, Jerry and myself being an example.”

It was fitting for this film to premiere six days after Veterans Day, as Jensen holds her experience in the military very near and dear to her heart.

“It’s difficult to express how beautiful of a thing it is to be part of something larger than yourself, being part of a team, having brothers and sisters in arms that you can protect. I was a horizontal construction engineer, which is basically a person who operates heavy equipment. You name it, I can operate it.”

A portion of proceeds from the film’s premiere benefitted the Lake Orion ‘Kids & Kops’ program, dedicated to fostering communication and trust with youth within the community.