Getting to Know the Oxford Rotary Club

By Dean Vaglia
Leader Staff Writer
The logo for Rotary International is so ubiquitous it’s almost camouflaged. The organization’s gold and blue gear is about as recognizable as those for the Lions or Knights of Columbus, and may even be mistaken for one or the other.
With such a recognizable logo and broad saturation of local chapters, it’s a reasonable question for someone who is not a member to ask “What exactly is a Rotary Club?” And what is a better way to answer such a question than to start in Oxford.
“Rotary is a benevolent organization that tries to do good locally, in your state and around the world,” Bob Warnke, fundraising chair for the Oxford Rotary Club. 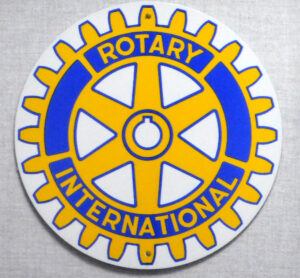 The Oxford club was founded in 1937 and helped sponsor the creation of the Lake Orion and Milford clubs.
At all levels Rotary works to help communities with humanitarian and economic projects. Early work for the Oxford club involved helping children with handicaps and sponsoring a “Farmer’s Night” event.
Rotary focuses on several humanitarian projects at the international level, the largest being the eradication of polio. Rotary’s work against polio began in 1979 with an immunization campaign in the Philippines. As of 2021 the only countries where polio remains endemic are Afghanistan and Pakistan. Nigeria is the most recent county to be declared polio-free, going three years without new cases by 2019 and being certified by the World Health Organization in 2020.
Members of the Oxford organization have also done humanitarian work abroad. Dr. Jaime Aragones has performed cataract surgery around the world sponsored by the Oxford club. The club also helped with several infrastructure projects in a Guatemalan village.
“In the not-too-distant past we put a solar well down in Guatemala,” Warnke said. “The solar well supplied water to a tilapia pond, a chicken farm [and] a great big field for fodder to feed cows. After that solar well was on, we dug another solar well. We put 10 kilowatts of power on the roof of a clinic that was built by one of our Rotarians. When we put those 10 kilowatts of power on the roof, we were able to supply clean electricity to a team house, a rectory, a church, another well and the clinic.”
Rotarians fundraise to pay for projects. The main fundraiser put on by the Oxford club is selling poinsettias in December. Individual Rotarians also donate to the international organization.
Membership for the Oxford club was strong in the past, but has recently seen a drop in active Rotarians.
“The pandemic took its toll on us,” Warnke said. “A lot of our Rotarians are older and have passed away in the last 10 years.”
Some of the ways the club is trying to make itself more visible is by hosting speakers.
Despite the drop in membership, Oxford Rotary carries on. Their current project is raising money to buy outdoor instruments for the playground at Powell Lake Township Park. As for what keeps Rotarians around, Warnke believes it’s their dedication to doing good.
“Those who still belong believe in the goals of Rotary,” Warnke said. “Service above self.”
Members have to be invited into the club, which involves going to at least three meetings and getting to know the current Rotarians. The club meets every second and fourth Tuesday at the Powell Lake Park pavilion at noon, as well as at the Ox Tavern every first Tuesday at The Ox Bar and Grill at 5 p.m.
Individuals looking to learn more about the Oxford Rotary Club can contact the library at (248) 628-3034 and ask for more information.