By Dean Vaglia
Leader Staff Writer
Girl Scouts Jenna Duong, Laila Carleton and Isabella Hurst of Troop 70945 are one step closer to earning one of the scouting organization’s highest honors.
The Girl Scout trio spent the afternoon on Aug. 10 installing green boxes along the Oakland County segment of the Polly Ann Trail. The PVC boxes are part of Duong, Hurst and Carleton’s service project to earn the Silver Award, the second highest award for Girl Scouts.
Girls pursuing the award need to complete a “Take Action” project in their community, and the trio took action to beautify and keep the Polly Ann Trail clean.
“We’re all passionate about nature and the outdoors,” Hurst said.
The scouts built 11 boxes in total and planted flowers and 14 maple tree saplings along the Oakland County segment of the Polly Ann Trail.
“It was really cool (to work with the Polly Ann Trail) because I’ve grown up with the Polly Ann Trail in my backyard,” Hurst said. “We’ve rode all around Oxford on the trail, and it’s just cool to be able to keep up the trail and keep it nice for everyone.”
Work on the project began in June and has been non-stop since. It took about 40 hours to build the boxes and plant the flowers and trees.
“First we had several meetings planning out what we were gonna do and communicating with the trail,” Duong said. “Then we planned out our budget and all the materials we were gonna need to buy. We did a lot of problem solving as well, because we were just using a reference (box) that was already on the trail. We didn’t have any specific details on how to build it, so we were just kind of winging it at some points.”
According to Hurst, Silver Award projects are required to showcase sustainability. While disposable plastic bags may not seem sustainable on the surface, Duong was quick to point out how damaging dog poop is to the environment.
“A lot of people don’t know this, but dog poop doesn’t actually fertilize the soil or anything,” Duong said. “It has too much protein in it, so it takes a whole year to decompose. It’s also very harmful to any living things around it because it has a lot of bacteria in it, so we wanted to make these to help keep everything nice and clean.”
At this point the trio — all incoming freshmen at Oxford High School — is close to earning the Silver Award. All they need to do is complete and file their report on the project and have it reviewed. After that, the next step in their Girl Scout careers is the prestigious Gold Award.
“(The Gold Award) is the highest honor a Girl Scout can get,” Hurst said. “That will take us 80 hours to do. From this we just grow more and become more independent and more involved with our community.”
Troop 70945 gave the trio $150 for supplies, which was helped by donations and contributions from their parents. The project cost about $350 by the end. 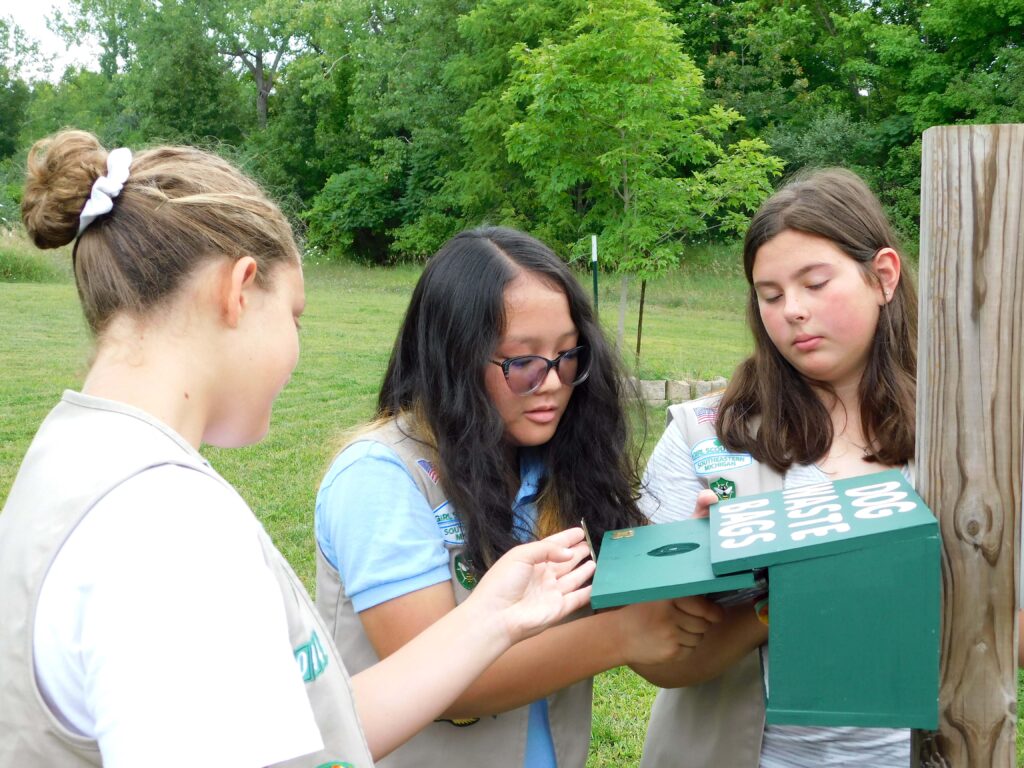