By James Hanlon
Leader Staff Writer
Joe Bice wasn’t feeling well a couple weeks ago. The Jr. Wildcat Football coach and 1990 Oxford High School graduate had a fever, then chest congestion, a headache, and all the aches and pains he could handle – all possible symptoms of COVID-19, the disease caused by coronavirus.
He hadn’t traveled internationally, but he had attended a national coaching conference in Louisville, Ky., where he hung out with a group of coaches from Kirkland, Wash., the epicenter of the U.S. outbreak. 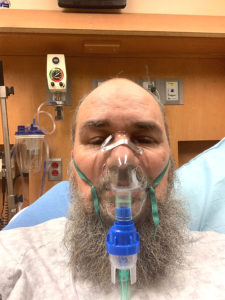 Bice, 48, was getting worried, ruminating about all the places he had been and the people he may have infected.
“I love Oxford with my heart and soul,” Bice said. “The thought of having this terrible illness and unknowingly passing it to the community was haunting me.”
Wednesday, March 11, he called Ascension Providence hospital in Rochester and told them his symptoms, travel history and who he had had contact with. They told him to come straight in.
“This was earlier in the outbreak so once they determined I had a legitimate need to be tested I didn’t have any problem (getting tested). I’d say I got in before panic started.”
Fortunately he was ahead of the curve and was able to get tested. With a national shortage of test kits, it has become difficult even for those with symptoms to be tested.
Masked security guards met him at the ER entrance. They gave him a surgical mask and escorted him to an isolation room adjacent to a nurse’s station with windows. “The room you never want to be in.”
A big biohazard sign was put on the door, warning everyone not to enter. The registration desk called him on his cellphone to sign him in.
Through the window, he watched a nurse put on a biohazard suit, which he described as having “Headlights, a full face shield, a cool bubble thingy that sealed around her neck, and of course some kind of breathing apparatus. Disposable gown, gloves, boots, you name it.”
Three more doctors showed up, wearing the same suits, to take a chest X-ray, electrocardiogram and vitals check.
The nurse rolled in a cart full of bottles, tubes and IV bags. The bottles reminded him of White Stripe beer bottles, but with “CDC” written in orange.
They started an IV, drew blood samples, then took swab samples from his throat and nose. “They put one so deep in your nose it feels like it’s coming out your throat.”
He was left alone awhile before the doctor came back to send him home. The Center for Disease Control ordered him to self-quarantine until his results came in.
Bice asked if he should tell everyone he had come into contact with. The doctor explained that until the results came back, he needed to rest, stay away from everyone, and monitor his symptoms. No need to panic everyone. If it came back positive, everyone he had been in contact with in the last week would need to be put into quarantine and monitored for symptoms as well.
Bice left the same way he came in, with masked security through cleared hallways.
Ruminations and worry came back. All the way home he worried about who he’d need to tell and what to say to his ten-year-old son. When he got home, he told his inner circle, a few close friends and family.
“Quarantine is like being an adult who’s been grounded by mom,” he described, “and waiting for dad to come home (results), except with Netflix and a surgical mask.”
Two days later, on Friday night, he got a call from the Health Department. He’s negative.
“Never have I heard sweeter words. I didn’t destroy Oxford. I didn’t kill my friends and family. After telling my circle, I went to my room and cried a little. Yeah I did. Tears of joy.” 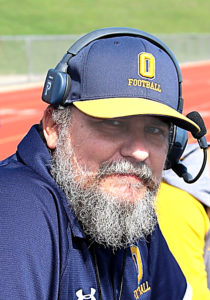 A few weeks earlier, Bice had a case of Influenza A along with double pneumonia. The doctors think the pneumonia got into his bloodstream and became septic. After a heavy regimen of antibiotics, he is starting to improve.
“My immune system has taken a beating the last 6 weeks or so, and it’s pretty vulnerable right now. Before the flu and pneumonia I had just recovered from an episode of kidney stones. I’m tired and my body feels pretty weak, but I’m resting and improving every day.”
Even though he tested negative, he’s still vulnerable. “I have no desire to venture outside at all. This shelter in place is fine with me. If I were to catch the virus now, with as weak as I’ve been, it could potentially be a battle for my life.” Being a single dad, that’s what scares him the most.
He hopes sharing his story will make a difference.
“I wish people were taking this more serious. I’ve seen people going through their normal routines as if nothing’s going on. This virus is real. It’s deadly. It’s all over Oakland County, and just a matter of time before it’s in Oxford. It’s not an ‘if’ it’s a ‘when.’ If they could experience what I did, what I saw, they’d be a little more worried.”
On top of football, he coaches his son’s lacrosse team. Hopefully they can still compete, but he sees things getting worse before they get better. “The worst part of all of this? No sports, for sure!”