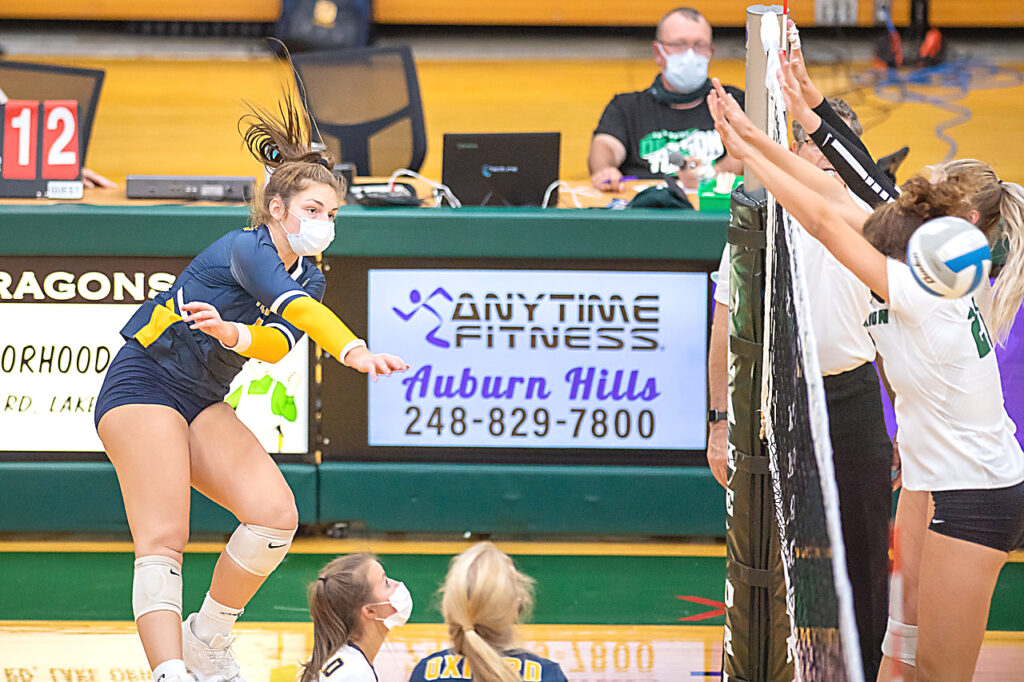 By Teddy Rydquist
Leader Staff Writer
Oxford Wildcat volleyball opened their 2020 season at the Ian Smith Gymnasium on September 12 by hosting the Marian Mustangs, North Branch Broncos and Rochester Falcons in a quad dubbed the “Mercy Power Series.”
The Wildcats gave Marian and North Branch, members of the Catholic High School League (CHSL) and Blue Water Area Conference (BWAC), respectively, tough fights but fell to each school in two sets. The battle with the Broncos was as close as could be, 25-23, 26-24.
There was a positive takeaway from the day, however, as Oxford topped an Oakland Activities Association (OAA) foe, the Rochester Falcons, in two sets, 25-7, 25-22.
Standing at 1-2 on the season, the Wildcats had another quad three days later, September 15, at West Bloomfield High School.
Building off the lessons learned from playing Marian and North Branch, two of the Lower Peninsula’s top teams, Oxford posted a 2-1 record in this quad, defeating the Flint Metro League’s (FML) Flushing Raiders and the host Lakers in two sets and narrowly dropping a three-set match with the Clarkston Wolves, 25-16, 21-25, 15-10.
Taking to the court for the third time in six days, the Wildcats concluded their week with their OAA Red opener on September 17, on the road against the rival Lake Orion Dragons.
Returning to the scene of where their 2019 season ended in the district finals, Oxford avenged last November’s defeat by prevailing in four sets, 25-20, 18-25, 26-24, 25-16.
Taking all this into account, the Wildcats boast a 4-3 (1-0 OAA Red) record. Coached by Brian Kim, Oxford is one of just three teams in the nine-member division to have a league win to their credit, as of September 20, joining Clarkston and the Stoney Creek Cougars.
Rick Wootten-Smith, one of Kim’s assistant coaches, pointed to sophomore outside hitter Rachel Townsend, whom he labeled the biggest surprise of the season thus far, senior libero Meghan Lupu, outside hitter Molly Miller, another senior, junior middle blocker Emma LaBarge, and senior setter Gabby Comito as the team’s early-season standouts.
“We’ve had a considerable amount of growth from last year,” Wootten-Smith said. “We have quite a few underclassmen who haven’t had the chance to show what they’ve got just yet but are going to be contributors toward the end of the season and in the years to come.”
Kim echoed Wootten-Smith’s comments, adding senior Cat Dobies has been instrumental on offense, defense, and in the serving game, and pointing to the consistency and leadership she brings to the table.
“Miller and LaBarge are our two returning All-Region athletes and are leading the attack,” Kim shared. “Comito is leading our team in assists and doing a great job distributing the sets to our attack.”
The Wildcats hosted Stoney Creek on Tuesday, September 22, but results were not available in time for publication in this edition. The girls will travel to Bloomfield Hills to square off with the Black Hawks on Thursday, September 24, and will return to the Ian Smith Gymnasium to clash with the Rochester Adams Highlanders on Tuesday, September 29. Both matches begin at 4 p.m.