The hum of BUZZ means there’s honey in the comb

One thing led to another and pretty soon, Oxford Township resident Aaron Dionne, 49, has about 200,000 honey bees to contend with. And, that’s okay. He’s raising the bees.

“I started because I was brewing beer and then mead,” the one-time automotive engineer turned investment Realtor said. “Then I started to think, ‘why not raise my own bees and have my own honey?’”

According to the website Healthline.com, “Mead, or “honey wine,” is an alcoholic beverage made by fermenting honey. It’s one of the oldest alcoholic beverages ever made, as it was consumed as far back as 4,000 years. Interestingly, mead was common across ancient cultures around the world including those in Asia, Europe and Africa. Though similar to beer, wine or cider, mead occupies a beverage category on its own since its primary fermentable sugar is honey.”

In 2012 he did his research, joined a honey bee club and started raising his own, despite his once dislike of “bees.” “When I was younger I got stung. Like many people I thought anything that stings is a bee. I didn’t like bees. Most people are stung by wasps or hornets, not honey bees.”

He then reached over and picked up one of his honey bees and held it in the palm of his left hand as it crawled around. He said, “I used to not be able to do this.” 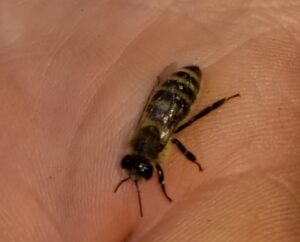 The more he immersed himself into honey bees, the more intrigued and mystified by them. “They really are pretty cool,” he said. “If you’re not afraid, and moving slowly you can pull out a frame and they’ll just buzz around, happy like they don’t even know you’re there.”

He’s owned about six acres of wooded property in Oxford since 2003. He currently has five hives going on two different stands out in a clearing of white clover. The most hives he has had was in 2015, when he had 16 hives running. Each hive is made up of “supers” and “frames.” The “supers” are the walls of the bees house, inside where the work happens, bees raised and honey made are the frames. There are about 12 frames per “super.” The bees draw out comb on the frames and fill them with either honey or larvae. They live in the bottom of the hives. As they make more honey, the bee keeper adds more supers on top, the bees fill these up with honeycomb.

By the end of the summer, each “super” will contain about 30 pounds of honey. Honey harvest is in the fall. He will leave the bottom two “supers” for the bees to eat for the winter.

On May 28, he “split” one hive, in order to start another. By splitting he took an empty super, with only three frames filled with honey and added bees. At that time there was no queen bee, so the worker bees bred one – feeding one larvae “royal jelly” a queen was born by July. The queen is larger and stronger than the other bees. Once he found her, he plucked her out of the hive and with a yellow marking pen, marked her back with a yellow dot to make it easier to find her in the future.

He said there are three ways to get honey bees. You can buy them from clubs or honey bee businesses, you house them and tend them over the winter or you can rescue them. He said when bees swarm a beekeeper can usually get the swarm by getting to their queen, which they will instinctively follow. So, he started a Facebook page called MIHoneyBeeRescue where he has pictures and videos of some of the bees he’s working with.

Oh, and the mead!

The hum of BUZZ means there’s honey in the comb added by Don Rush on July 20, 2022
View all posts by Don Rush →