By Dean Vaglia
Leaader Staff Writer
The Oxford Downtown Development Authority (DDA) is upgrading the Village of Oxford farmers market spot at 15 N. Washington for the 2022 season.
Oxford-based asphalt company Birmingham Sealcoat is paving the 15 N. Washington space for free, replacing the gravel lot with blacktop. Between Birmingham Sealcoat’s labor and Ajax donating the asphalt, the paving is valued at $40,000.
“They were able to get all the asphalt sponsored, and they are doing all the equipment and time and everything” Kelly Westbrook, DDA executive director, said.
Muralist and 2001 Oxford High School graduate Nick Hottmann is scheduled to paint a mural in the market space in early June on the side of 19 N. Washington, which is currently occupied by Sisters Salon. The mural incorporates Oxford colors of blue and gold as well as the Oxford skyline. Four hearts and seven stars honoring those killed and wounded on Nov. 30 are incorporated into the design.
Other efforts to upgrade the space include getting lights, basketball hoops, cornhole boards, picnic tables and other amenities to “really activate that space and make it more of a community space.” While the changes aim to make the space more amenable to many people, one group Westbrook is targeting in particular is teenagers.
“Sometimes I feel like the little part we are missing out on in Oxford is something to do for our teens,” Westbrook said. “But I feel like now that the theater is back up and running full time, then we will have this space teens can go to, and then they will have the trolley they can jump on and bring them back … I am hoping that brings more of our youth down to Oxford.”
The farmers market begins on July 21, briefly overlapping with the return of Concerts in the Park. Each concert night will be themed, starting with an ‘80s night on Thursday, June 16.
“We are kicking it off with a local band ‘Majiklee Dulishus,’” Westbrook said. “We are encouraging people to get into their ‘80s gear for that concert.”
Attendees are encouraged to dress up like their favorite Disney characters on June 23 for kids night, where Oxford resident Ava Swiss will headline at 7 p.m. while “The Young Bloods” open up the show.
“We just have a broad [mix of] genre[s] of music this year,” Westbrook said. “We have everything from kids music to dueling pianos to The Beatles tribute band to local band ‘Six Feet Apart’ … I think it will be really, really fun; there is something for everybody.”
In addition to securing the summer concerts lineup, the DDA secured Sick Pizza as a vendor for pre-show refreshments. The downtown pizzeria will sell their namesake 10 inch pizza and breadsticks in Centennial Park out of a portable storefront starting at 5:30 p.m. on Thursdays.
“They have figured out this contraption where they are going to bring it down on a trike,” Westbrook said. “But it is this huge box where they can keep the pizza premade.”

On Sunday, May 22 there is a benefit concert at the American Legion Post 108, on E. Drahner Road.  Musician Bob Holt will perform starting at 7 p.m.
More information about the farmers market and the full Concerts in the Park schedule can be found at www.facebook.com/DowntownOxford. 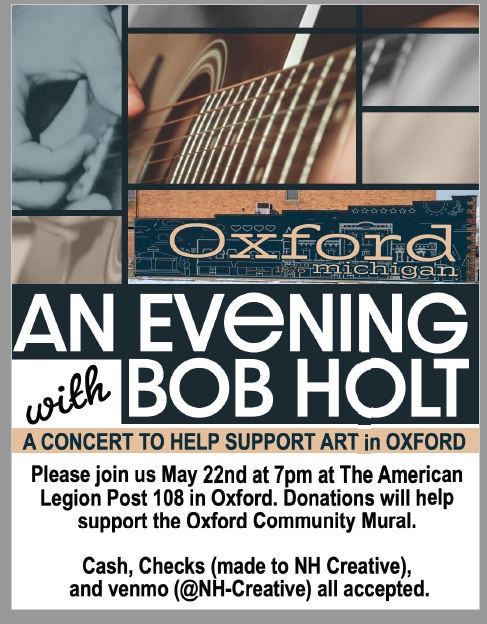