Wildcats fall to the Dragons in district soccer championship 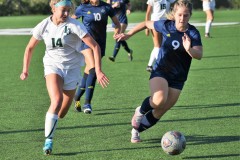 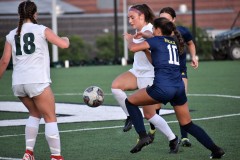 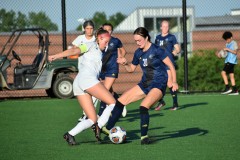 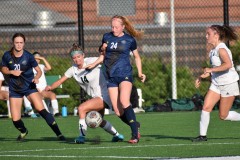 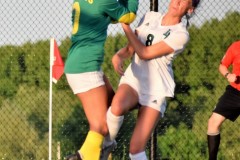 It was what everyone expected between the Lake Orion and Oxford girls’ varsity soccer teams – a pitched, physical, back-and-forth battle that came down to the final seconds of play.

When it was over, the Lake Orion defeated Oxford 1-0 and hoisted the Michigan High School Athletic Association (MHSAA) District 5 championship trophy in celebration on Thursday at Lake Orion High School.

This is the Dragon’s second district title in as many years. Last year, the team beat Grand Blanc in overtime to capture the district championship.

The Wildcats topped the OAA White division and finished the season with a 14-5-2 overall record.

Lake Orion (11-8-3) lost to Bloomfield Hills, 2-4, in the MHSAA Regional Semifinal on June 7 at Meadows Stadium in Novi.

Oxford’s road to the district final began on May 27 with 4-3 win over Clarkston in the second overtime.

The Wildcats then demolished Davison in the district semifinal on May 31.

Lake Orion coach Amanda Hutchinson said she knew the Dragons would have a tough time against the Wildcats.

Oxford kept the pressure on the Dragons throughout much of the first half with physical play in the midfield and defense and quick counterattacks on offense.

Juniors Alyssa Kuhl and Alexandria Dawood both had strong games in the midfield for Oxford, contending with an equally strong Dragon midfield.

Defense/midfield Ava Kettler did what she usually does – playing tough on defense and running the length of the field to be an offensive threat as well.

Senior forward Katlyn Peck got a yellow card with 12:36 left in the first for not playing the ball and taking out a Lake Orion player from behind.

For the rest of the half, Lake Orion survived several Oxford scoring opportunities, including a shot by Kettler that caught the Dragons off guard after a quick restart.

Lake Orion finally broke the 0-0 tie when senior forward Annamarie Fosmoen raced after a pass and crashed into Oxford goalkeeper Brianna Barrows. The ball came loose and junior Audrey Llewellyn followed up the play, putting the ball in the back of the net and giving the Dragons the 1-0 lead.