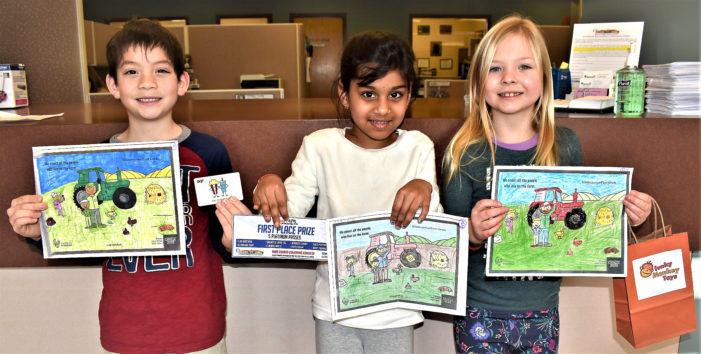 Launched by communications and grants manager C.J. Carnacchio, the Charter Township of Oxford held their first ever “Kids Count Coloring Contest” to encourage and promote participation in the 2020 United States Census. Reminding residents all children count when it comes to gathering census information, the contest was open to all kindergarten-fifth grade students at Oxford […]

For a team that had hovered within three-games of the .500 mark for the duration of the season, it was kind of fitting the Oxford Wildcats wrap up their regular season at 10-10 (5-7 Oakland Activities Association White). Holding their traditional pre-game Senior Night festivities, Oxford played their final home game of the campaign on […]

The season’s finale event, five Oxford Wildcat wrestlers qualified for the Michigan High School Athletic Association (MHSAA) Individual State Meet at Ford Field on March 6-7. Speaking to the youth on Oxford’s roster, only one of the team’s participants – Nate Call – is a senior. The other four Wildcats to compete were freshman Tate […]

No local ballot initiatives Joining Idaho, Mississippi and Missouri, Michigan voters will cast their votes this coming Tuesday, March 10, for the presidential primary. What is referred to as a closed primary, voters must declare which party’s primary election they wish to participate in before receiving a ballot. Each ballot only contains candidates from one […]

A very young roster, only three of the 12 girls on the Oxford Wildcats’ varsity basketball team are seniors. Taking to the court at the Ian Smith Gymnasium for the final time, Oxford sent their seniors – Gabby Dinges, Aleah Dymond and Sarah Tyrrell – out in style by topping the rival Lake Orion Dragons, […]

Facing some of the best competition the state of Michigan has to offer, the Oxford Wildcats boys’ swimming and diving teams traveled to Birmingham Groves High School to compete in the Oakland Activities Association (OAA) Red Division Championships from Feb. 26-28. Setting the field for the Feb. 28 showdown, the preliminary swimming races took place […]

Holding their bi-weekly meeting at the Oxford Township Meeting Room on Feb. 27, the Planning Commission voted, 5-0, to recommend the approval of a two-phased Beaumont medical complex to the Board of Trustees. This was the second time the Planning Commission has green lit this project. The group previously voted to approve the proposal at […]

Grandpa, granddaughter together at Autorama

For the fifth consecutive year, Terry Dworin and his granddaughter Tatum Wright, will take one of their classic hot rods to the Meguiar’s Detroit Autorama, at the TCF Center (formerly known as Cobo Hall) from Friday, Feb. 28-Sunday, Mar. 1. As they have each of the last three years, the pair will display Dworin’s 1953 […]

Following a successful six-year stint with the Hazel Park Vikings, Kyle Rowley will coach a bit closer to home, with the Armada Tigers, in 2020. A 2004 Oxford High School graduate, Rowley, 34, starred for the Wildcats for three years at quarterback and safety, earning First-Team All-State recognition at the Division II level from the […]