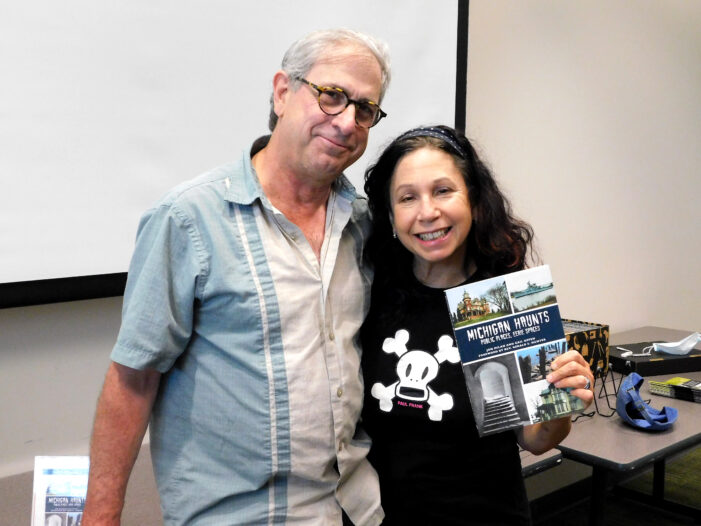 By Dean Vaglia Leader Staff Writer From Calumet to Detroit, it seems like Michigan is dense with ghosts. Or at least that’s what authors Jon Milan and Gail Offen put forth at the Oxford Library on Wednesday, Aug. 25. Through their work as authors of books about Michigan history, Milan and Offen have picked up […]

When I first arrived at the Oxford Leader on May 10, 1999, I never expected to stay. I had just graduated from the University of Michigan and this was my first job as a professional journalist. I thought I’d stay here for a couple years, add a few lines to the old resume, then move […]

Burke reminds us of the need for civility, compromise

“There ought to be a system of manners in every nation which a well-formed mind would be disposed to relish. To make us love our country, our country ought to be lovely.” – Edmund Burke The above quote is from Burke’s “Reflections on the Revolution in France,” published in 1790. Burke’s been on my mind […]

Red and green. Green and red. A lot of folks are thinking about Christmas lights these days. Not me. The only red and green lights on my mind this week are the ones produced by traffic signals. It’s high time Oxford Village officials looked into installing a  signal at the three-way intersection of W. Burdick […]

Legalize it and be done with it

“The amount of money and of legal energy being given to prosecute hundreds of thousands of Americans who are caught with a few ounces of marijuana in their jeans simply makes no sense – the kindest way to put it. A sterner way to put it is that it is an outrage, an imposition on […]

Anyone who reads my column knows that, in general, I’m not a big fan of government. But there are certain organizations and individuals at the local level that I sincerely believe do a good job and truly care about the community. From time to time, I like to point them out. This week, I’d like […]

Why is it whenever there’s a decision to be made or an issue to be examined, government’s first reaction is usually to form a committee rather than exercise a little common sense? I have nothing against using committees to gather information, weigh pros and cons, and present findings. But it’s not always necessary to do […]

DDA board needs more members with skin in the game

“The nine most terrifying words in the English language are: “I’m from the government and I’m here to help.” – U.S. President Ronald Reagan While listening to the Oxford Downtown Development Authority (DDA) board last week discuss the need for more involvement, input and guidance from business owners, a thought occurred to me. If this […]

Manager search continues, but I liked the guy from Wayland

As the Oxford Village Council continues its search for a new manager, I’d like to offer my two cents. For what it’s worth, I really liked Timothy McLean, the current manager of the City of Wayland. Council interviewed him during a special meeting on June 15. I have a good feeling about him. I found […]